Administration of IL-2 to HIV-infected patients leads to expansion of a unique subset of CD4+CD45RO–CD25+ cells. In this study, the origin, clonality, and function of these cells were investigated. Analysis of TCR excision circles revealed that the CD4+CD45RO–CD25+ cells were the product of peripheral expansion but remained polyclonal as determined by TCR repertoire analysis. Phenotypically, these cells were distinct from naturally occurring Tregs; they exhibited intermediate features, between those of memory and naive cells, and had lower susceptibility to apoptosis than CD45RO–CD25– or memory T cells. Studies of intracellular cytokine production and proliferation revealed that cytokine-expanded naive CD25+ cells had low IL-2 production and required costimulation for proliferation. Despite elevated expression of forkhead transcription factor P3 (foxP3), they exerted only weak suppression compared with CD45RO+CD25+high cells (Tregs). In summary, in vivo IL-2 administration to HIV-infected patients leads to peripheral expansion of a population of long-lived CD4+CD45RO–CD25+ cells that express high levels of foxP3 but exert weak suppressive function. These CD4+CD25+ cytokine-expanded naive cells, distinct from antigen-triggered cells and Tregs, play a role in the maintenance of a state of low turnover and sustained expansion of the CD4+ T cell pool. 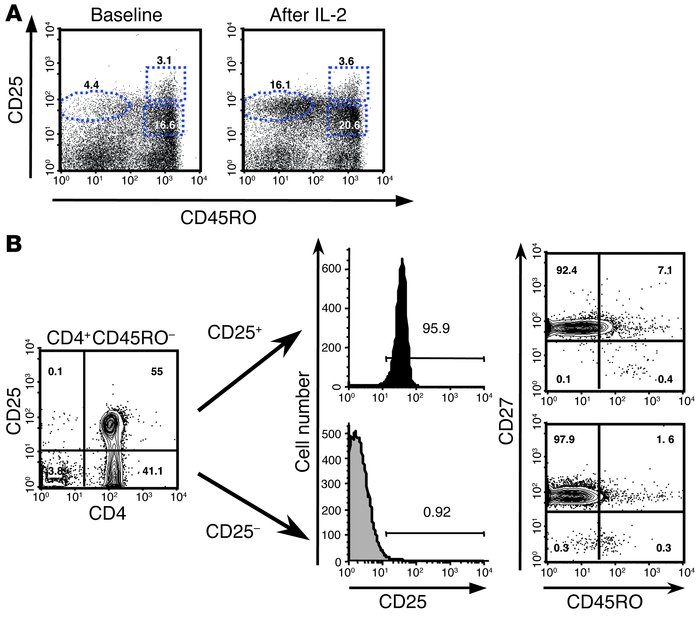 Expansion of naive CD4+CD25+ cells after IL-2 administration. () Representative example of phenotypic changes occurring after IL-2 administration. Dot plots of CD45RO and CD25 expression on CD4+ T cells of an HIV patient at baseline and after 3 cycles of IL-2. CD25-expressing CD45RO– and CD45RO+ cells increased after IL-2 without significant change in the CD4+CD45RO+CD25+high subset. () An example of the bead separation of studied CD45RO– subsets is shown. Naive cells were defined as CD45RO– and CD27+.